If your garden includes native plants that attract lots of pollinators, take a close look: some of those little “bees” you’re seeing are probably hover flies, also know as syrphid flies. At first glance they look like bees or wasps; on a closer a look they’re a bit… weird. Those giant eyes are the giveaway: these are flies disguised as bees, by the adoption of brilliant yellow bands around their bodies.

Hover flies are significant pollinators. They’re numerous, and as you can see, they pick up pollen on their hairy bodies just like bees do. But their importance to the ecosystem isn’t well understood; they’re not as glamorous as bees and haven’t attracted a lot of research.

Why imitate bees? The assumption is that – like other animal mimics – they get some protection from predators by resembling another species with stronger defenses. Hover flies don’t have stingers; maybe it pays to look like the neighbors who are packin’ heat. On the other hand, bees mainly use their sting to protect their colonies’ nests, and hover flies aren’t social – so there might be other reasons.

The one in the photo below is almost certainly Eupeodes americanus, the American hover fly, the most common of the over 6,000 species of hover fly.

It’s hard to be certain about the identification. These photos might be all the same species, but they don’t look totally identical: 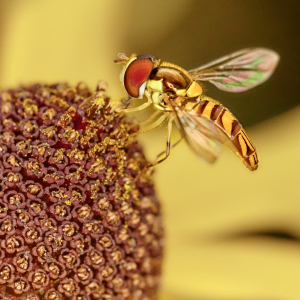 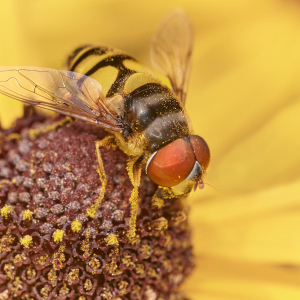 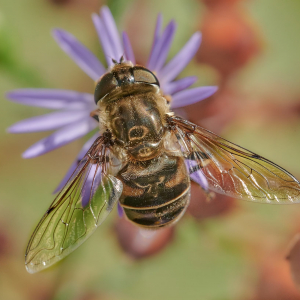 Other hover fly species do show up in our garden. And some, like the one below, are less bee-like and maybe just a bit creepy – there’s something about flies in disguise.… But now that I’m used to seeing them, busily pollinating plants in my garden, I regard them as unique, colorful and valuable insects.